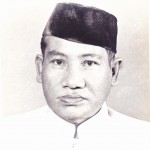 Ustaz Munawir was born in Bawean Island on 16 June, though there are some disagreements as to the year. However, his passport indicated that he was born in 1922. Due to a recording error when he applied for Singapore citizenship, his name was printed as Matnawi and not Munawir. His nickname was Embing and he was the eldest of five siblings. He was married in Java and Sumatera, but was not blessed with children. When he was small, he was given to Hj Ibrahim, a rich man in Bawean. He was raised with much love and was sent to Pesantren Bawean to learn Islam. Among his teachers were: Almarhum Kiayi Wahid, Almarhum Kiayi Suaib (Hj Said bin Ibrahim) and Almarhum Kiayi Othman Al-Ishaqi.

In 1941, he took a small boat to Singapore with his close friend Pagi bin Darbi. When he arrived in Singapore, he married Saodah bte Ahmad and was blessed with three children: Hjh Samawiyah, Almarhumah Hjh Norliah and Ahmad. When his wife passed away, he married Hjh Fatimah bte Ahmad and had another four children: Hjh Rohani, Mohd Bunyamin, Hjh Inkawati and Hjh Tahyijati.

Initially he taught at Masjid Tentera Di-Raja, Clementi, where he worked as muezzin. He then received invitations to teach at several houses – Ghim Moh Surau that he founded at the void deck of a flat, and at Pondok Peranakan Gelam Club where he was its permanent teacher. He taught Arabic books and Malay books written in Jawi, encompassing various subjects, and once translated the book Aqidatul Awam.

He was a good orator, often invited to give lectures at Mawlid Rasul Celebrations. He was also blessed with the talent of playing kompang, rebana and other percussion instruments. When he was working as muezzin at Masjid Tentera DiRaja, he setup a percussion group whose members were his students from the Malay Regiment. He could also compose beautiful melodies when reciting the Berzanji book.

He was a devoted and loving father and teacher. Wherever he went, he could be seen with his students because he would always squeeze in some Islamic advice and teachings regardless of where he was.

He passed away from diabetes on 7 January 1987 in his own home.

May Allah bless his soul.

View all posts by Webmaster →